Dodoma is on the hunt for three points against Coastal Union

Tanzanian outfit Dodoma Jiji hope to get back to their winning ways when they take on Coastal Union on Sunday, 28 November.

Dodoma drew 1 – 1 in their last league encounter against Biashara, where Anuary Jabir scored the opening goal for Mbwana Makata’s side in the first half. The tall striker controlled the ball from a failed aerial clearance and hit the ball on a half-volley, scoring spectacularly.

The game went on, and Dodoma failed to finish it off. A 1-0 lead in football is a dangerous score line as teams are still in the game and can always equalize. In the 60th minute, Biashara crawled back into the game thanks to a goal by Deogratins Mafie, who slotted in the near post from a cross.

Dodoma goalkeeper Hussein Masalanga touched the ball with soft hands before it went in. The strike caught him off guard as he had probably anticipated that the striker would control the ball; however, it hit the first time. 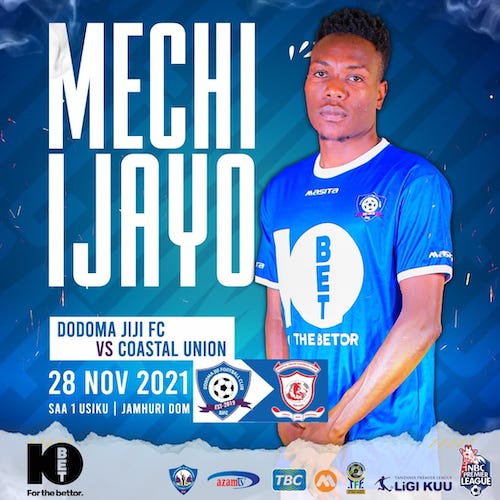 He would have been disappointed to concede in the manner in which he did. No keeper in the world wants to concede goals.

The draw must have felt like a loss for Dodoma as they dropped two points. However, Dodoma expected to take the three points on offer, especially with the home advantage.

Biashara had drawn two of their previous games and were a bit low on steam. However, the one point moved Dodoma to third place on the log in the Tanzanian Premier League, with 11 points collected already, which is a fantastic feat for the newly-promoted side.

Dodoma is playing in their first Premier League season and has started their campaign spectacularly. They are trying to keep Tanzanian giants Young Africans and Simba at the top of the table. The points collected at the start of the season will make a big difference when the league concludes.

Makata’s main objective this season is to avoid relegation; he has to secure the club’s status to ensure the team’s growth, brand, and fan base. In addition, he now has to galvanize his side to be ready for the Coastal Union game.

Coastal Union will visit the Jamhuri Stadium on the back of an away win against Polisi Tanzania, where they won 1-0. The smash and grab victory was a morale booster for Coastal Union, and they will take inspiration from it when they meet the high-flying newcomers in the Premier League.

Coastal Union is in fine form, too; their last five results include one win, three draws and one loss. Although they are in ninth place on the log with seven points, they trail Dodoma by four points. Dodoma on Sunday will want to widen the gap between them and Coastal Union.

Three points will be ideal for Dodoma and ensure they continue to have an excellent start in the topflight.